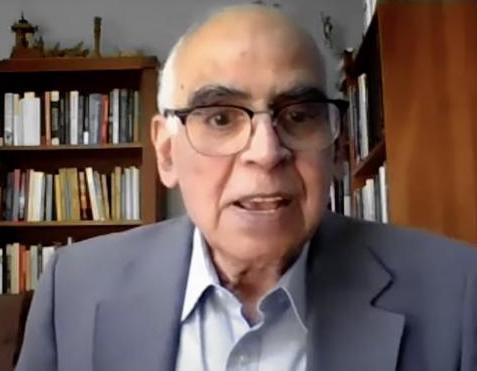 VV, as he is known, just celebrated his 90th birthday in fine fettle. A native of Calcutta and trained in theoretical physics in France, he held the wonderful title of Professor of Physics and Humanities at the Rochester Institute of Technology until his retirement, and is a member of the RNA Board of Advisors. He has written and spoken in many forums on the relationship between the scientific worldview and the Hindu traditions that hold deep importance to him. But he’s found a home in the religious naturalist orientation, as in this beautiful piece below.

There are but two entities in my conscious being:

The inner I that perceives and reflects, and the outer world that is perceived and reflected on.

That outer world of which I know but a small part is what to me is Nature.

Nature extends from the minutest fundamental particles that arise in the endless dynamic vacuum fluctuations in the microcosm to the vast inconceivable expanse of space that is home to all that come and go in the universe, small and stupendous: dots and dust, stars and satellites, planets and photons.

The totality of all this that has subsisted and transformed for eons is a wonder in itself, but more wonderful still is this little spark of consciousness that becomes aware of so much of it all for a brief bracket of time and then seems to disappear into inscrutable void.

The contemplation of this magnificent marvel, and a mysterious sense of gratitude for the opportunity to experience even a tiny fraction of it all, is what constitutes the deepest religious experience for me.

I recognize that traditional religions, in so far as they enrich individual lives with prayers and pilgrimages, chants and music, joyous observances and communal sharing of sorrows, and injunctions for caring and compassion and love, whether ritualistic or humanistic, do have a role in societies, in so far as their preaching does not include intolerance and hatred. But for me as an individual, the grateful and meditative reflection on Nature and its intrinsic Mystery is what constitutes the religion that I recognize as Religious Naturalism.