All cultures have a central story – of how people and all things came to be and why things happen as they do. This shows us what we are and our place among all that surrounds us, and it gives a framework for considering what is right and good, and what we should aspire to and do.

For religious naturalists, the story begins almost 14 billion years ago, with a massive expansion of energy (a “Big Bang”) that led over time to emergence of galaxies, solar systems, and life on Earth. It shows humans evolving over millions of years from earlier forms of life, living in social groups, developing cultures and technologies, and thriving to a point where a challenge, now, is to learn how to manage this growth.

As Loyal Rue described it, this story  “reveals to us the common origin, nature, and destiny shared by all human beings.” It “shows us in the deepest possible sense that we are all sisters and brothers – fashioned from the same stellar dust, energized by the same star, nourished by the same planet, endowed with the same genetic code, and threatened by the same evils.” It also “humbles us before the magnitude and complexity of creation. Like no other story it bewilders us with the improbability of our existence, astonishes us with the interdependence of all things, and makes us feel grateful for the lives we have. And not least of all, it inspires us to express our gratitude to the past by accepting a solemn and collective responsibility for the future.”

This story has been referred to as The Epic of Evolution, Everyone’s Story, Big History, and other names. One telling, by Carl Sagan*, is shown below, and is followed by links to additional information and perspectives.

Here and there denser accumulations of gas were imperceptibly growing, globes of matter were condensing – hydrogen raindrops more massive than suns. Within these globes of gas was first kindled the nuclear fire latent in matter. A first generation of stars was born, flooding the Cosmos with light. There were in those times not yet any planets to receive the light, no living creatures to admire the radiance of the heavens.

Deep in the stellar furnaces the alchemy of nuclear fusion created heavy elements, the ashes of hydrogen burning, the atomic building materials of future planets and lifeforms.

Massive stars soon exhausted their stores of nuclear fuel. Rocked by colossal explosions, they returned most of their substance back into the thin gas from which they had once condensed. Here in the dark lush clouds between the stars, new raindrops made of many elements were forming, later generations of stars being born. Nearby, smaller raindrops grew, bodies far too little to ignite the nuclear fire, droplets in the interstellar mist on their way to form the planets. Among them was a small world of stone and iron, the early Earth.

Concealing and warming, the Earth released the methane, ammonia, water and hydrogen gases that had been trapped within, forming the primitive atmosphere and the first oceans. Starlight from the Sun bathed and warmed the primeval Earth, drove storms, generated lightning and thunder. Volcanoes overflowed with lava. These processes disrupted molecules of the primitive atmosphere; the fragments fell back together again into more and more complex forms, which dissolved in the early oceans. 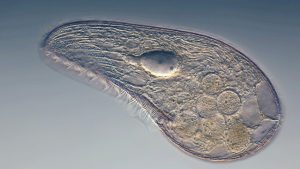 After a time the seas achieved the consistency of a warm, dilute soup. Molecules were organized, and complex chemical reactions driven, on the surface of clays. And one day a molecule arose that quite by accident was able to make crude copies of itself out of the other molecules in the broth. As time passed, more elaborate and more accurate self-replicating molecules arose. Those combinations best suited to further replication were favored by the sieve of natural selection. Those that copied better produced more copies. And the primitive oceanic broth gradually grew thin as it was consumed by and transformed into complex condensations of self-replicating organic molecules. Gradually, imperceptibly, life had begun.

Single-celled plants evolved, and life began to generate its own food. Photosynthesis transformed the atmosphere. Sex was invented. Once free-living forms banded together to make a complex cell with specialized functions. Chemical receptors evolved, and the Cosmos could taste and smell. One-celled organisms evolved into multicellular colonies, elaborating their various parts into specialized organ systems. Eyes and ears evolved, and now the Cosmos could see and hear. 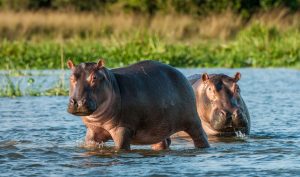 Plants and animals dissolved that the land could support life. Organisms buzzed, crawled, scuttled, lumbered, glided, flapped, shimmied, climbed and soared. Colossal beasts thundered through the steaming jungles. Small creatures emerged, born live instead of in hard-shelled containers, with a fluid like the early oceans coursing through their veins. They survived by swiftness and cunning.

And then, only a moment ago, some small arboreal animals scampered down from the trees. They became upright and taught themselves the use of tools, domesticated other animals, plants, and fire and devised language. The ash of stellar alchemy was now emerging into consciousness. At an ever-accelerating pace, it invented writing, cities, art and science, and sent spaceships to the planets and the stars.

These are some of the things that hydrogen atoms do, given fifteen billion years of cosmic evolution.” 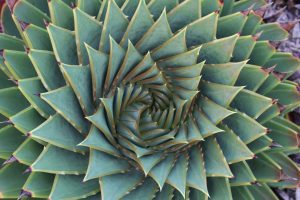 An important part of this story is emergence, in which relationships among component may produce properties that go beyond what is present in the parts. For example:

With these and many other examples, the sum is not just greater than the parts; it is fundamentally different from the parts. Or, as some have put it, “something more” results from “nothing but” when particular combinations and relationships result in new qualities.

As Loyal Rue explained it, emergence is not about “new kind of stuff”, but “new relationships between components that are already there”; “when existing parts enter into new dynamical relations, new realities appear.” As Philip Clayton put it, “The nature of the world is such that it produces, and perhaps must produce, continually more complex realities in a process of ongoing creativity”.

Big History
…..The Universe
……….The Big Bang
……….Formation of stars and galaxies
…..Our solar system and Earth
The history of our world in 18 minutes. David Christian. TED talk. April 2011.
The Most Astounding Fact About The Universe, Neil DeGrasse Tyson
……(3 minute video; “We are part of this universe. . . The universe is in us”)
Journey of the Universe
Earth’s new address: ‘Solar System, Milky Way, Laniakea’
Evolution Will Change How You See the World
Emergent Universe Oratorio (#1 The Great Flaring Forth) – a musical and visual interpretation
The Story of Everything (Kealoha) –
in epic poem format, using storytelling, movement, music, and art

The Universe Story: From the Primordial Flaring Forth to the Ecozoic Era. Brian Swimme and Thomas Berry.
Everybody’s Story: Wising Up to the Epic of Evolution. Loyal Rue.
A Universe from Nothing: Why There Is Something Rather than Nothing. Lawrence Krauss.
Big Bang: The Origin of the Universe (P.S.). Simon Singh.
The first three minutes. Steven Weinberg.
The Story of Earth: The First 4.5 Billion Years, from Stardust to Living Planet. Robert M. Hazen.

What is emergence?
Emergence (wiki)
The Sacred Emergence of Nature. Ursula Goodenough and Terrence Deacon
Beyond Reductionism – Reinventing the Sacred. Stuart Kauffman

Emergence of Life and human beings are examined from other pages:
…..Life
…..Being human