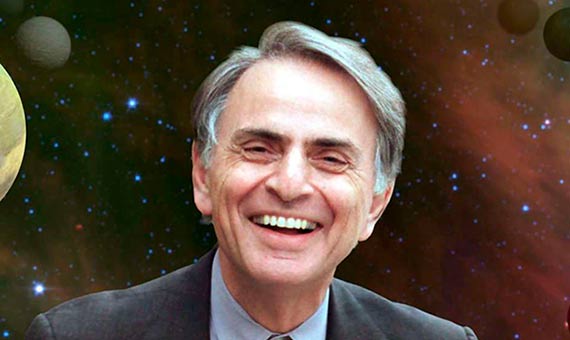 The joyous and essential Carl Sagan, like Rachel Carson, has become a household name, largely because of his splendid 1980 television series Cosmos: A Personal Voyage, the most widely watched series in the history of public television, seen by at least 500 million people in 60 countries. A professor of astronomy at Cornell, he made important scientific contributions before becoming a public intellectual and a compelling advocate for scientific curiosity and rigor. His death from cancer at age 62 will be forever mourned, but we are blessed with his eloquent legacy.

Look again at that dot. That’s here. That’s home. That’s us. On it everyone you love, everyone you know, everyone you ever heard of, every human being who ever was, lived out their lives. The aggregate of our joy and suffering, thousands of confident religions, ideologies, and economic doctrines, every hunter and forager, every hero and coward, every creator and destroyer of civilization, every king and peasant, every young couple in love, every mother and father, hopeful child, inventor and explorer, every teacher of morals, every corrupt politician, every “superstar,” every “supreme leader,” every saint and sinner in the history of our species lived there-on a mote of dust suspended in a sunbeam.

Our posturings, our imagined self-importance, the delusion that we have some privileged position in the Universe, are challenged by this point of pale light. Our planet is a lonely speck in the great enveloping cosmic dark. In our obscurity, in all this vastness, there is no hint that help will come from elsewhere to save us from ourselves.

Science is not only compatible with spirituality; it is a profound source of spirituality. When we recognize our place in an immensity of light‐years and in the passage of ages, when we grasp the intricacy, beauty, and subtlety of life, then that soaring feeling, that sense of elation and humility combined, is surely spiritual. So are our emotions in the presence of great art or music or literature, or acts of exemplary selfless courage such as those of Mohandas Gandhi or Martin Luther King, Jr. The notion that science and spirituality are somehow mutually exclusive does a disservice to both.

‘Spirit’ comes from the Latin word ‘to breathe’. What we breathe is air, which is certainly matter, however thin. Despite usage to the contrary, there is no necessary implication in the word ‘spiritual’ that we are talking of anything other than matter (including the matter of which the brain is made), or anything outside the realm of science. On occasion, I will feel free to use the word. Science is not only compatible with spirituality; it is a profound source of spirituality. When we recognize our place in an immensity of light-years and in the passage of ages, when we grasp the intricacy, beauty, and subtlety of life, then that soaring feeling, that sense of elation and humility combined, is surely spiritual.[115]

A religion old or new, that stressed the magnificence of the universe as revealed by modern science, might be able to draw forth reserves of reverence and awe hardly tapped by the conventional faiths. Sooner or later, such a religion will emerge.

I would love to believe that when I die I will live again, that some thinking, feeling, remembering part of me will continue. But as much as I want to believe that, and despite the ancient and worldwide cultural traditions that assert an afterlife, I know of nothing to suggest that it is more than wishful thinking.

In science it often happens that scientists say, ‘You know that’s a really good argument; my position is mistaken,’ and then they would actually change their minds and you never hear that old view from them again. They really do it. It doesn’t happen as often as it should, because scientists are human and change is sometimes painful. But it happens every day. I cannot recall the last time something like that happened in politics or religion.

I am often amazed at how much more capability and enthusiasm for science there is among elementary school youngsters than among college students.

Some people think God is an outsized, light-skinned male with a long white beard, sitting on a throne somewhere up there in the sky, busily tallying the fall of every sparrow. Others—for example Baruch Spinoza and Albert Einstein —considered God to be essentially the sum total of the physical laws which describe the universe. I do not know of any compelling evidence for anthropomorphic patriarchs controlling human destiny from some hidden celestial vantage point, but it would be madness to deny the existence of physical laws.

The idea that God is an oversized white male with a flowing beard who sits in the sky and tallies the fall of every sparrow is ludicrous. But if by God one means the set of physical laws that govern the universe, then clearly there is such a God. This God is emotionally unsatisfying … it does not make much sense to pray to the law of gravity.

We are the local embodiment of a Cosmos grown to self-awareness. We have begun to contemplate our origins: starstuff pondering the stars; organized assemblages of ten billion billion billion atoms considering the evolution of atoms; tracing the long journey by which, here at least, consciousness arose.

The nitrogen in our DNA, the calcium in our teeth, the iron in our blood, the carbon in our apple pies were made in the interiors of collapsing stars. We are made of starstuff. … The cosmos is within us…. We are a way for the universe to know itself.