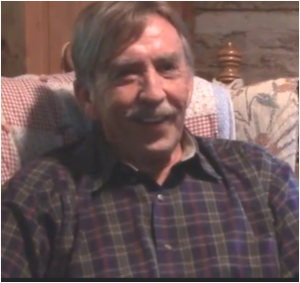 Loyal Rue is Professor Emeritus in the philosophy and religion departments at Luther College in Decorah, Iowa.

In Nature is Enough, Part Two, he responds to those who feel that naturalism is unable to satisfy deep spiritual longings. He examines ways that religion can fit comfortably with naturalism, and he describes a religious person simply – as “one who takes ultimate concerns to heart”. He gives views on how a basis for values, a sense of meaning, responses to loss, and sources of hope can be grounded in religious naturalism. And, as he examines the promise of this orientation, while also acknowledging challenges, he concludes that, yes, nature, and religious naturalism, can be enough.

In “Religion is Not about God”, he offers a model of religion – explaining that all religions have, at their core, a central myth, including cosmological ideas (on “how things are” – in how all came to be and what is real) 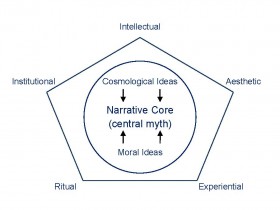 and moral ideas (on what is right and good). Several strategies support the central myth. Some of these are intellectual, as in books or discussions that present the story and interpret or debate its meaning. Some involve artistic depictions or ritual responses, or ways of encouraging and understanding religious experiences. Institutions form, with teachers and leaders, as groups consider and respond to the story.

Given challenges that face our modern world and appreciating the power of myth, one conclusion Rue reaches is that “We need a new story” – not based on outdated understanding, not specific to particular groups but, in being grounded in scientific knowledge, this can be common to all and shared around the world.

If religion is not about God, then what on earth is it about (for heaven sake)? It is about us. It is about manipulating our brains so that we might think, feel, and act in ways that are good for us, both individually and collectively. Religious traditions work like the bow of a violin, playing upon the strings of human nature to produce harmonious relations between individuals and their social and physical environments.

Religious naturalists bear an attitude of reverence toward the universe as a whole, and toward the earth in particular – and they are disposed to expressing their reverence by affirming that nature is both sacred and mysterious. Naturalists are keenly aware of the contingency of all life forms, and when this awareness is taken to heart it generates a sense of gratitude toward nature.

…there is no promise for the future of the biosphere apart from a story that can inform us about how things really are in the physical world, and which things ultimately matter for sustaining the viability of natural and social systems. We have no hope…apart from a story that can unite diverse cultures with a vision of their shared natural history, their shared problems and their common destiny. We shall be doomed…unless we embrace a story that can move us to enlarge the scope of our interests and affections to include all humans, all species of life, and the biosphere itself. And no story…holds more promise for addressing these needs than the myth of religious naturalism.

The secret to wising up in response to the global problematique will be to come up with the right symbols that will engage the emotions in a new way, such that the result of our doing so will be to enhance global solidarity and cooperation. To simplify, our task is yet again to enlarge the tribe, that is, to expand by symbolic means the range of our affection, sympathy, gratitude, and guilt to include all members of our species, even those of future generations.

Our calling is no less than to achieve for our time what these ancient traditions did for theirs . . .

We know the problem: exceeding the Earth’s carrying capacity. We know the urgency: red alert, no time to lose. We know the causes of the problem: excessive human population and excessive material consumption. We know the general solution: reduce human impact to sustainable levels of population and consumption. We know on what the general solution depends: changes in social, political and economic goals and policies. We know the fundamental forces that can drive such changes: values, attitudes, goal hierarchies, self-esteem links. And finally, we know how to manipulate these fundamental forces: a full-court press on behavior mediation systems, utilizing the ancillary strategies of a morally relevant mythic tradition.

[W]e must articulate a common story, a narrative of origins, nature and destiny that can give us a shared orientation in nature and history.

We are called – here, now, urgently – to the task of mythopoesis.

Books
Everybody’s Story: Wising Up to the Epic of Evolution
Religion is Not About God: How Spiritual Traditions Nurture our Biological Nature and What to Expect When They Fail
Nature is Enough: Religious Naturalism and the Meaning of Life

Video
Religion is not about God (5 minute talk)
Beyond Belief (11 minutes)
Nature is Enough (41 minutes; conversation with Michael Dowd and Connie Barlow)