“This nature to which we intimately belong –
a nature that sustains, renews, and inspires in countless ways –
can command our wholehearted religious commitment.” 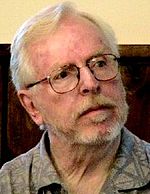 Donald Crosby is a philosopher whose work provides a solid intellectual grounding for religious naturalism. In A Religion of Nature, he explains the view that nature is all that is real, and that nature can be a focus of religious orientation. In this, and in other books and articles, he examines challenges and opportunities that come with this view – in how values may be envisioned, the relation of humans to other creatures, and how aspects of nature may serve as symbols. For example,

In The Thou of Nature: Religious Naturalism and Reverence for Sentient Life, he explores the moral and spiritual obligations of humans to animals and suggests that we should develop an I-thou, not an I-it, relationship with other sentient beings.

In Living with Ambiguity: Religious Naturalism and the Menace of Evil, he examines how a religious view that recognizes sacredness in nature deals with the harm that can also come from nature; arguing that good and evil co-exist potentially and actually in human life and in nature as a whole, and that a challenge in religious faith is how to live a meaningful life in the face of this fact.

In More Than Discourse: Symbolic Expressions of Naturalistic Faith, he discusses the role of symbols in religion and examines symbols that may be significant for religious naturalism (for example, a waterfall, a hummingbird, a fallen leaf, a burning candle). He looks at poetry, music, mediation, and prayer as symbolic practices, and he discusses John Muir as an exemplar.

In addition to these book-length works, he has written articles on related topics – several of which are listed below. Also, a new book, Nature as Sacred Ground: A Metaphysics for Religious Naturalism, is due to be published in December, 2015.

Its great wings outstretched, the brown pelican spirals in the thermal air. Scarcely a flicker of those magnificent wings is required for it to soar further and further aloft. Finally reaching an apogee of the spiral, it gently banks and slowly descends, only to be uplifted again in its circling flight. . .
For me, at that moment, this pelican’s flight is a compelling symbol of the numinous powers, presences, and wonders of the natural order to which we both miraculously belong. . .
If you want to know what my faith means to me, one of the most adequate ways in which I can try to make you aware of its meaning is simply point you to that splendid creature, nonchalantly rising and falling on motionless wings in invisible currents of air. In the last analysis, I am only able to say, ‘There, don’t you see! This is what the sacredness of nature means, all that it bestows on us, invites us to ponder, and requires of us.’
…..More Than Discourse, pages 3 and 7

We have no need of God, gods, animating spirits, or other sorts of putative religious objects, nor do we need to pine for another life in another realm beyond the wondrous home we find already in our natural world. Nature itself, when we rightly conceive of it and comprehend our role within it, can provide ample context and support for finding purpose, value, and meaning in our lives.
…..A Religion of Nature, page 169

Nature is every bit as mysterious and wonderful as traditional concepts of God, and perhaps far more so in that it is not the outcome of deliberate purpose or design but of self-contained, incredibly self-transcending creative processes.
…..Transcendence and immanence in a religion of nature, page 253

…nature can be saving for those attuned to its presence and influence.
It has the power to inspire, enhance, and renew our lives.
We are natural beings in the deepest recesses of our bodies and spirits,
and learning how to live in accordance with that fact
provides us with both profound challenge and profound hope.
…..Living With Ambiguity, page 56

Some of his books and articles are listed and linked below.

…..(For items from SUNY Press, first chapters can be downloaded as pdf files.)

These include “From God to Nature: A Personal Odyssey”, Chapter 1 in “A Religion of Nature”, which describes how, after growing up in Bible-belt northwestern Florida and preparing for the ministry, Crosby was exposed to new ideas in college and came to see church teachings in historical and symbolic perspectives. This led, in time, to what he describes as a conversion from theism to a religion of nature.…..